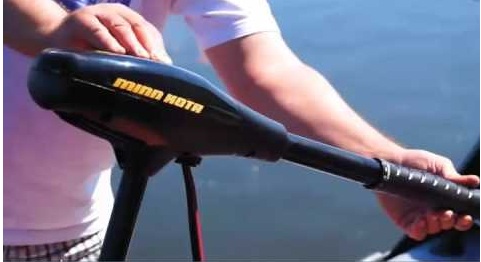 When it comes to choosing a motor for your Jon boat, electric trolling motors have many advantages.

Fishermen and duck hunters love the added stealth an electric motor gives them.

Sure, you won’t get the speed you would with a gasoline outboard, but when you’re out hunting and fishing it’s the aim is to get game and not showboat!

It’s worth noting that some fishing lakes and reservoirs are also “Electric Only”.

Easier on the Environment & Wallet!

Another great advantage to electric motors (besides being a more environmentally-friendly source of power) is they are much easier on the wallet than outboards.

If you do your homework, you can pick-up a new one for a couple of hundred dollars. As outboard motors generally cost five to ten times more, this’ll save money you can spend on other accessories.

The Importance of Thrust

Electric trolling motors use batter-power to propel themselves through the water. The amount of power needed is called “Pounds of Thrust”. When choosing an electric motor, the “lbs” number will be specified so you know exactly what you’re getting.

Apart from reaching a desired cruising speed, having enough thrust is important when you meet headwind or high waves. Your boat will be rendered sluggish and you won’t be able to maintain your desired position for casting. Therefore, thrust is the most important consideration when selecting a trolling motor.

What Size Trolling Motor Do You Need?

The amount of thrust you required is dependent upon the weight of your boat. A useful rule to follow is that for every 100lbs of weight you need 2lbs of thrust. So if your boat is 2,500lbs fully-loaded, you’re going to need a motor with a minimum of 50 lbs of thrust.

As you can imagine, it get’s tricky trying to weigh everything up. Another way you can calculate the minimum amount of thrust is by the length of the boat. A 12ft Jon boat will require 30lbs of thrust, a 14ft boat 32lbs and a 17ft needs 50lb of thrust.

Another general rule of thumb when it comes to motors is to get the biggest one you can afford (within reason!).

A few of the more popular electric boat motor manufacturers include Minn-Kota,  MotorGuide, and Newport Vessels

Minn-Kota makes a wide variety of models to choose from with prices all the way up to $1500.00.

Many people choose electric motors due to their low cost and Newport Vessels manufacturers a 55 lb thrust motor for less than $300.00.  MotorGuide also offers different models with their models generally costing $275.00 to $1250.00.

The Maxxum 55 does not have a lot of special features but it is a good choice for boats up to 17 feet or boats that weigh up to 2,750 lbs.

The PowerDrive V2 series varies from the Maxxum line in that the PowerDrive has advanced control options, an optional sonar transducer which is used in conjunction with a fish-finder so that the fish-finder will display correctly, and with the PowerDrive comes electronic steering rather than cable control.

The Minn-Kota Edge series is an excellent choice for a bow mount motor. These motors have enough power to provide enough thrust for Jon Boats all the way up to 21 feet. Edge models feature a mount made with marine grade anodized aluminum, as well as, a fixed speed motor.

The Traxxis model is the one to choose if you are looking for a transom mount motor. It is also extremely easy to stow.

The Traxxis is for freshwater only and if you plan on trips in saltwater, you should go with Minn-Kota’s Riptide Transom model.

MotorGuide also manufactures a variety of electric motors ideally suited for Jon Boats. Their recommended models include the Bulldog 40 FT, the X3 series, and their Xi5 series.

MotorGuide’s Xi5 series is their top of the line electric motors. These motors can be used in both salt and freshwater. They can be controlled wirelessly and are sophisticated enough to allow you to position your boat through the use of GPS.

To compete against the likes of Minn-Kota and MotorGuide, Newport Vessels offer extended warranties and outstanding customer service. Their electric motors are quite a bit cheaper than the competition, too.

As this article show, when it comes to electric trolling motors there’s a lot of choice!.So when choosing one, be sure to write down the features that are important to you and then start shopping!

We are a participant in the Amazon Services LLC Associates Program, an affiliate advertising program designed to provide a means for us to earn fees by linking to Amazon.com and affiliated sites.
We use cookies on our website to give you the most relevant experience by remembering your preferences and repeat visits. By clicking “Accept”, you consent to the use of ALL the cookies.
Cookie settingsACCEPT
Privacy & Cookies Policy

Any cookies that may not be particularly necessary for the website to function and is used specifically to collect user personal data via analytics, ads, other embedded contents are termed as non-necessary cookies. It is mandatory to procure user consent prior to running these cookies on your website.