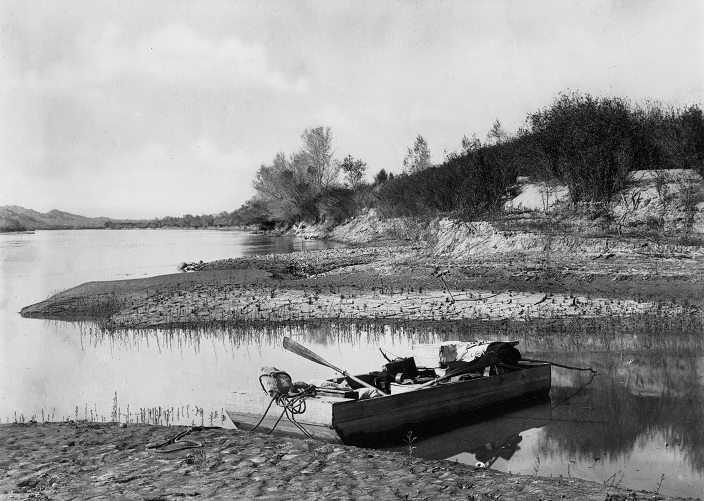 As this website is all about Jon Boats, I thought it’d be worthwhile discussing what they are and where the name comes from!

What Is A Jon Boat?

Quite simply, a Jon Boat is a small fishing or hunting boat.

Predominately, they have a flat hull (those some do have a “V Hull”) and this provides much needed stability for reeling in fish or tracking ducks. Usually, the size of the boat is dictated by the body of water you’re using. For greater distances and larger waves, a longer boat is typically preferred.

You can find more information on our page “Jon Boat Sizes“.

These boats are usually made from Aluminum, Fiberglass and Wood.

As a general rule, aluminum jon boats are the preferred choice. Their reduced weight allows the hunter or fisherman to stow more gear (or bring a friend along).

Having a lighter boat also means you don’t require a bigger engine, and this is another plus. Add in the fact they’re easier to launch and far easier to modify, their appeal is easily understood.

Fiberglass and wood boats do have they’re own advantages – particularly in salt-water.

You can read more about this comparison here.

Where Did The Name Come From?

No-one is really sure exactly where the name “Jon Boat” originated.

What we do know is that people began referring to “Flat-Bottom Skiffs” in the The Ozarks (the mountainous region that covers part of Missouri and Arkansas) at the start of the 20th century. Having a flat-bottom made them ideal for traversing the shallow waters found in the Missouri Valley.

“Ozark John Boats” were popular for float fishing, duck hunting and even carrying timber from the end of the 19th century. Tourists also loved them as they could fish standing up with little fear of tipping.

Originally, these “Float Boats” were made from pine and green lumber. Because the cost of construction was low, they could be disposed of after a single voyage downstream.

The arrival the 20th century saw improvements in their design and construction. Jack pine began to be used and so, “Jack” became “John Boat”.  At least this is how one theory goes!

Jon or John – The Scandinavian Connection

Shrewd observers will note there are two different ways of spelling the boat – “John” and “Jon”. This alternative “origin theory” could go some way to explaining why.

In Scandinavia, “Jon” is one of the most common names. Fishermen used small, flat-bottomed boats to ferry themselves and their gear to larger fishing boats.

As they were stable, useful and cheap to construct, the fisherman took them to their hearts. In doing so, they bestowed the familiar nickname “Jon” upon them.

One thing is certain. More than 125 years after “Jon Boats” first became popular, outdoorsmen all across America still love these industrious boats!

We are a participant in the Amazon Services LLC Associates Program, an affiliate advertising program designed to provide a means for us to earn fees by linking to Amazon.com and affiliated sites.
We use cookies on our website to give you the most relevant experience by remembering your preferences and repeat visits. By clicking “Accept”, you consent to the use of ALL the cookies.
Cookie settingsACCEPT
Privacy & Cookies Policy

Any cookies that may not be particularly necessary for the website to function and is used specifically to collect user personal data via analytics, ads, other embedded contents are termed as non-necessary cookies. It is mandatory to procure user consent prior to running these cookies on your website.